[2.2]Paracyclophane is a unique aromatic compound consisting of two stacked benzene rings in close proximity (approximately 3.0 Å). When the [2.2]paracyclophane skeleton is incorporated into a π-conjugated backbone, π-stacked structure, in which π-conjugated systems are partly stacked and aligned, can be formed [1].

The representative examples of [2.2]paracyclophane-containing π-stacked systems are as follows…

Each partially stacked π-electron system in the through-space conjugated systems absorbs and emits light independently. We have synthesized [2.2]paracyclophane-containing through-space conjugated dimers and trimers [3]. It was found that photoexcited energy as transferred through the stacked π-electron systems in a single polymer chain. The [2.2]paracyclophane scaffold appropriately aligned the transition dipole moments of the stacked π-electron systems, resulting in a high energy-transfer efficiency (FET > 0.999) with a high energy-transfer rate constant (kET) on the order of 1012 s–1. Using this system, an efficient unidirectional energy transfer could be achieved [3]. 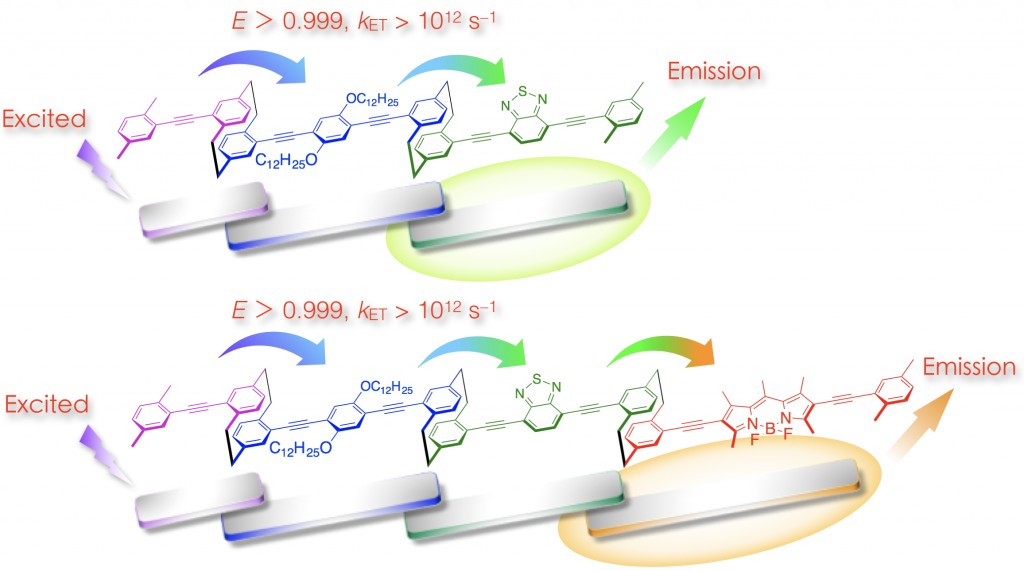 We have prepared conjugated microporous polymers (CMPs) containing tetrasubstituted [2.2]paracyclophane units as the junctions of the network structure [4]. The CMPs comprised micropores with diameters of less than 2 nm. They exhibited large surface areas; the BET surface area (SBET value) of the CMP synthesized by Yamamoto coupling reached 1000 m2/g. The morphology of this CMP was relatively uniform and the particles had diameters of approximately 200 nm; therefore, it was readily dispersed in common organic solvents. The polymer networks can be tuned by introducing various aromatic units into the cyclophane monomer. Studies on application of the CMPs consisting of tetrasubstituted [2.2]paracyclophane junctions as host materials for light-harvesting antennae are underway.